In addition to being a C&C grad, Peter is now a parent at City and Country. 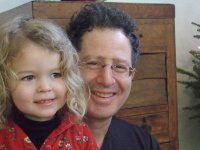 What have you done with yourself since graduation?
I graduated from Fieldston High School, spent two years at U.C. Berkeley, then two years at Harvard University, from which I got my B.A. in English in 1977.

It was during my freshman year in college that I decided I wanted to become a writer, and for most of my college career I wrote short stories and generally went about doing the things that I thought would help me along that path.

Following graduation, however, I discovered the challenges that come with trying to make a successful career of writing and I ended up supporting myself through an assortment of odd jobs and freelance writing and editing gigs. Though I was eventually able to build a decent career writing magazine pieces, I also longed to do something more “substantial.” Ironically, that "something" didn't materialize until I'd reached my lowest ebb – leading me to take a job working for an illegal bookmaker.

The experience of the year I spent doing that, which ended with my arrest, formed the basis for what would be my first book, a memoir entitled Confessions of an Ivy League Bookie. Since the publication of that book in 1996, I have published three more books, as well as written a television pilot and numerous shorter pieces. The writing life will probably always be one of struggle, but I consider myself incredibly fortunate nonetheless. How many people actually wind up doing the thing they love?

How did your education at City and Country shape the way you look at the world and your role in it?
I think that City and Country helped nurture my creative impulses, encourage my inventiveness and teach me never to be afraid to take the less-traveled road.

C&C encouraged group activity and an atmosphere in which everyone's input mattered and added to the whole. Odd for a writer used to working in a room alone to say, but I've always been happiest taking part in endeavors that were of a group nature.

On the flip side, not all of what I learned at C&C was applicable to the world outside. I think I was never able to completely metabolize the fact that other places did not operate under the same precepts of cooperation and encouragement, and to this day I find it tough to understand that kind of attitude when I come up against it.

In what ways do you feel your education continues to this day?
In every way. C&C opened me to the joy and excitement of learning, and it also taught me how to turn the most commonplace of objects into whatever my imagination could conjure--crucial elements in any act of creation.

Have there been any interesting moments (big or small) in your adult life when you felt your time at City and Country affected a decision you made?
Our 12s teacher, Cynthia, irritated that we were flying paper airplanes during class, said, "Okay, if you're really interested in paper airplanes, then let's really learn how to make the best paper airplane possible." And so we devoted an entire week to studying aerodynamics and origami, and we learned everything we could about making a great paper airplane. At the end of the week, we flew a six-foot-long plane off the roof of the 13th Street building and watched it catch an updraft and fly all the way over to the River Yard. I often think of that experience when I find myself dabbling in something. I think, "Okay, if you're going to spend time doing this, then really do it. Go all the way." It has at times taken me a bit further down a road than some might think prudent, but it has also allowed me to go beyond what might otherwise have been a superficial experience and make it into something meaningful.

Is there anything else you’d like to add or explain about your experience at City and Country?
There's a line I've always loved from a Tom Robbins novel, "It's never too late to have a happy childhood." But what C&C taught me is that it's never too early either.