Looking Beyond New York: How the tragic fire at the Notre Dame Cathedral in Paris inspired the Vs to take action in their classroom

From Works In Progress, the C&C Magazine, Issue III
“Did you hear what happened last night?” a V in Will Sears’ Group asked last April during a Group meeting. “Notre Dame is burning!” Quickly, several more Vs chimed in, sharing what they had heard about the fire at the historic Parisian cathedral. The next day, the children raised the topic again, and an animated conversation ensued. The Group’s observations and questions ranged from the fire and firefighters, to the history of the cathedral, to stories about saving the artifacts inside. “Will?” asked one of the Vs, as the Group’s interest grew, “Can we build Notre Dame?”
It was a question that took Will another two weeks to answer. During that time, the curiosity, initiative, and tenacious spirit of his Vs convinced him that their interest in Notre Dame merited embracing a new plan—one that seemed impossibly difficult at the outset, but became one of their most powerful learning experiences of the year.
As the news unfolded about the fire, the Vs’ interest in and study of the cathedral intensified. Students discussed it daily, sharing what they knew and immersing themselves in the narrative. “They shared facts about the building—when construction started, how long it took to build, and what a flying buttress is and why they were used in Notre Dame,” recalled Will. “They knew when the spire was built, they talked about the fact that there had been a fire in the past, and they told stories about trying to save the artifacts inside the cathedral. I was astonished at how much they knew without my having to say a word.” The students’ understanding of the cathedral, its historical context, and the fire continued to evolve for weeks as the news story developed in real time. As part of this process, the students generated a list of everything they knew about Notre Dame and created a sequence of events. The Vs usually build structures they’ve seen in New York, and because a trip to Paris wasn’t feasible, they found pictures of Notre Dame and began drawing it to get a better sense of what the building looked like before the fire. 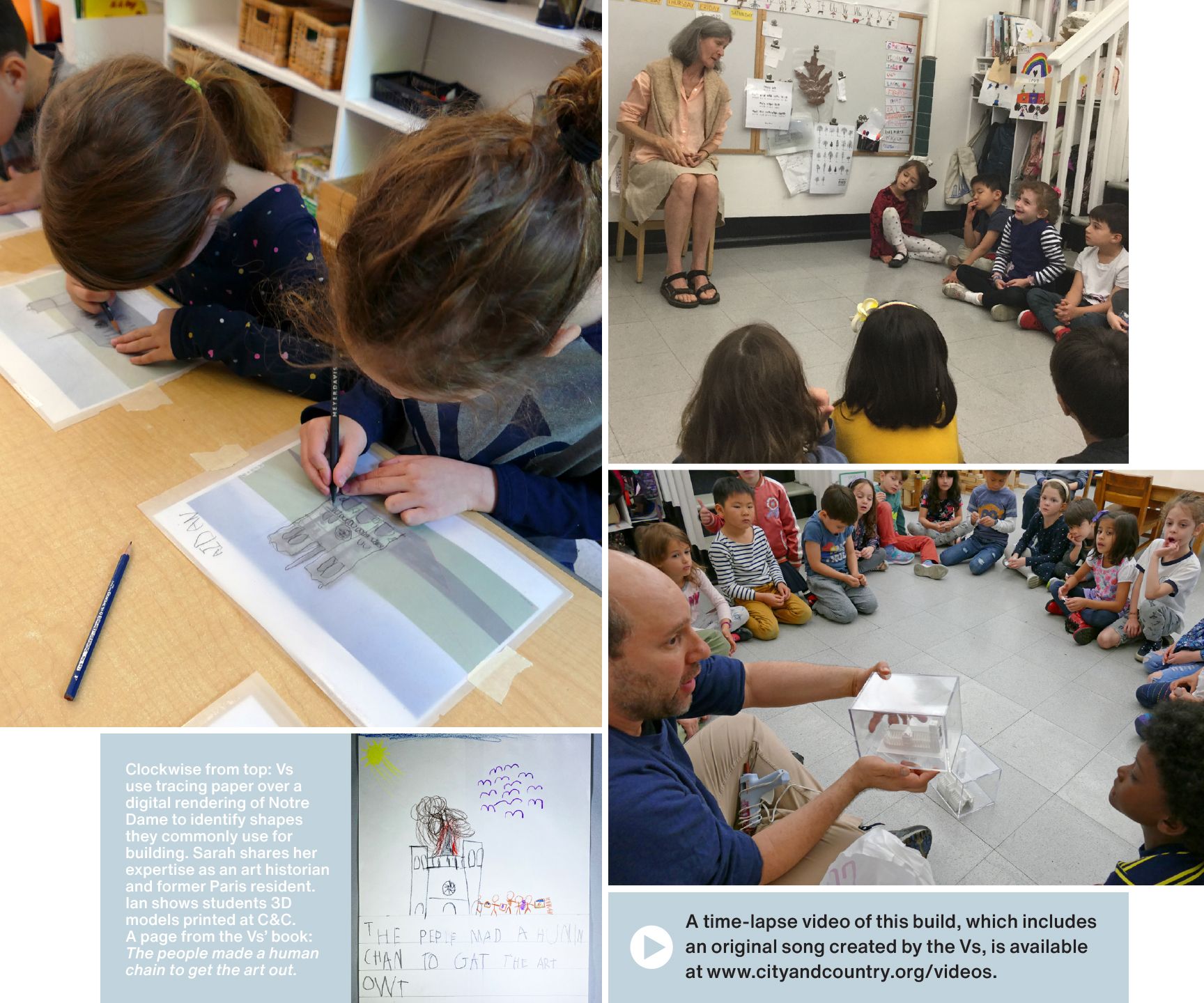 The Group read the book Cathedral: The Story of Its Construction by David Macaulay, which recounts the construction of an imaginary Gothic cathedral. They printed out multiple perspectives of Notre Dame from a digital model, then did a shape search using tracing paper, a technique that helps them think about how to simplify complex forms into the shapes with which they normally build. Technology Integration and Support Specialist Ian Klapper visited the Vs to show several 3D models of Notre Dame created at C&C, and he brought the students to the Computer Lab to show them how the 3D printer works.
Once they had a grasp of the overall structure of the building, the Vs began making clay models of Notre Dame. The understanding they demonstrated in doing so is what finally convinced Will they could successfully build Notre Dame using their unit blocks.
To help expand the Vs’ understanding of Notre Dame, XIIsS Group Teacher Sarah Whittier ’67, who lived in Paris and was previously an Art History teacher, visited the Group to share what she knew about the cathedral and about Paris. The students also took a trip to the Church of St. John the Divine, the building in Manhattan that most closely resembles Notre Dame. There, they drew pictures, took notes, made many observations, viewed the details of the building through binoculars, and asked questions that would inform their research and, eventually, their block build. James Ingram, Sarah Whittier’s son and a New York City firefighter, came to C&C to talk about his job and about putting out a fire at St. John the Divine just one day before the fire at Notre Dame happened.
Finally, it was time to start the block build. Before tackling the large build, the students made small-scale block models. Through this process, they discovered that many parts of the Cathedral were made of repeating patterns, and they learned that once they successfully made one section, they could repeat that section to build a larger part of the full structure. “Symmetry and patterning are part of our Math curriculum, so this reinforced what we were doing in our other work,” observed Will. “It was also really neat to watch them put these concepts into practice and problem-solve as a Group. They did a lot of troubleshooting around making a vaulted ceiling, which was extremely challenging. Once they figured out how to make the roof, they were able to repeat the process. They discovered ways to build more efficiently using critical thinking. It was all them. I hope people believe me when I say I didn’t touch the blocks!”
The Vs incorporated their artistic skills into the project to add details, like stained glass windows made of paper and gargoyles made of modeling clay. With the help of a Vs parent, they made small versions of the stained glass windows to go on the block structure and larger ones to put on their classroom windows, so they could see the light passing through as they would have under the windows in Notre Dame.
Not surprisingly, the narrative continued to develop during the block build. The students learned that there had been a priest who held the only key that could open a chest of ancient artifacts in the building; when he couldn’t get there in time, firefighters had to use special tools to open the lid. They recounted how the firefighters formed a human chain to save the artifacts and reenacted this process in the Block Yard. They told the story of the bees that were kept on the roof, that these were the first living creatures to return to Notre Dame—because they don’t have lungs and weren’t irritated by smoke from the fire.
Along with the block build, the Vs also created a book and wrote a song, both telling the story of the fire. The students illustrated the book and wrote the story of the fire in their own words, and Will plans to read it to future Vs.
The Group’s full study of Notre Dame took six weeks, with three weeks spent on the block build. To celebrate the completion of the study, the Vs held an opening ceremony to which their parents and other members of the community were invited. They sang the song they wrote in honor of the cathedral, showed a video of the block build, and led tours of the block version of Notre Dame, pointing out details like the stained glass windows and gargoyles, the bishop entombed in the structure, and their Group of Vs block people on a field trip to the cathedral.
“I’m proud of it because, just like others who saw it, I was impressed that they actually did it,” said Will of the final product. “I didn’t build it. They had the idea for building it. They figured out how to build the models. They found ways to make the big building work. They wrote the book and the song. I really just curated experiences to keep them on their way.” 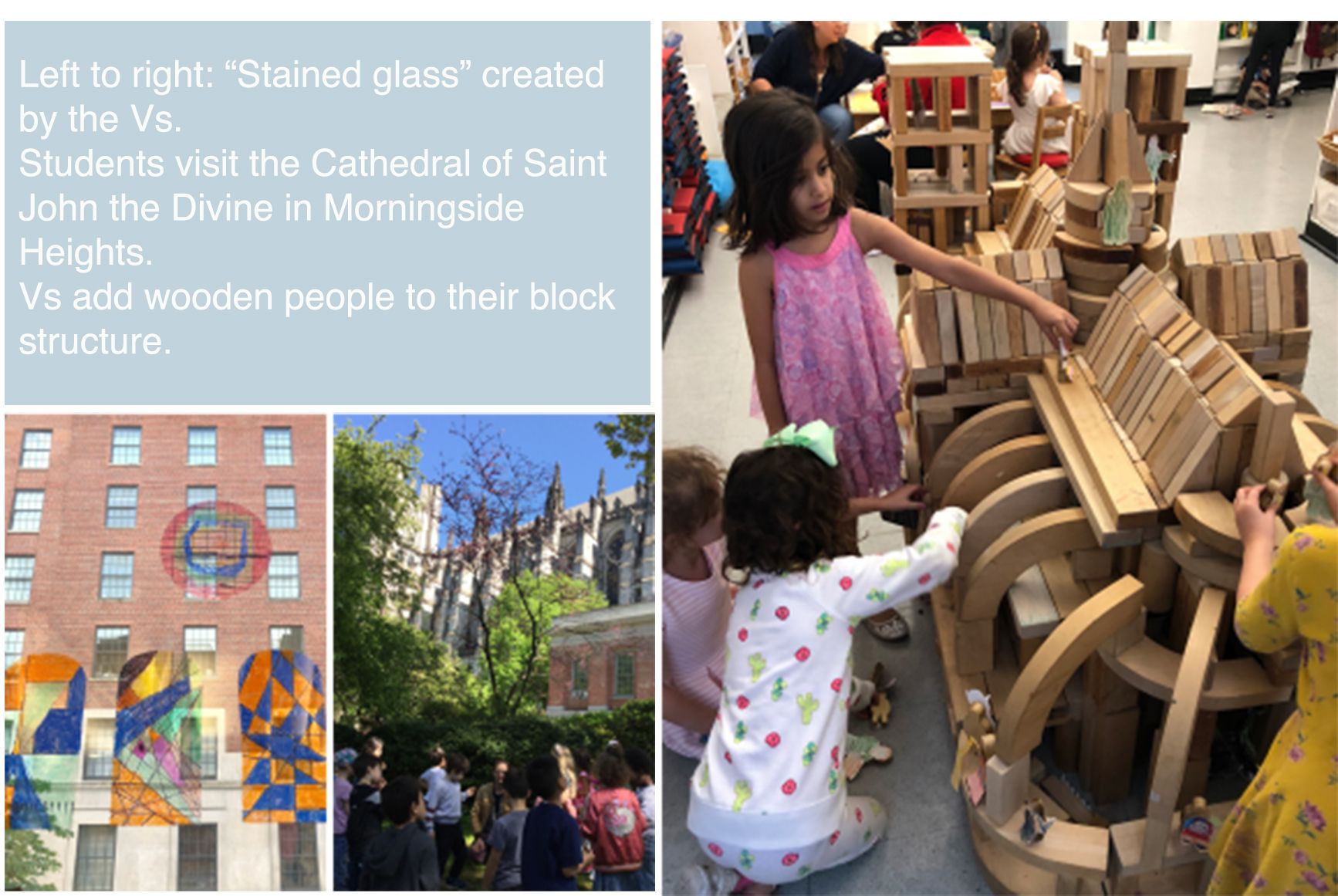