The 13s: Graduating is just the beginning.

The 13s is the most challenging and for many the most memorable year. They plan and fund their own class trip, and they write their own newspaper for the entire School. They produce their graduation ceremony, perform their final Play, present a gallery show of their work and sing from the songbook they’ve been using for the past 12 years. In the end, we watch as another group of C&C graduates makes its way into the world, ready to meet challenges both large and small, not only as great students, but as good citizens as well.

Learn more about the 13s program—click on each topic to expand.

The 13s program focuses on American history from 1830 to 1877 and addresses two comprehensive questions: What caused the American Civil War? What have been the lasting consequences of that War? In the fall and winter we focus first on the years leading up to the Civil War (1830 to 1860), then on the Civil War itself (1861-1865) and finally on Reconstruction (1865 – 1877).

Students begin the year by compiling their families’ genealogies and by visiting Ellis Island. Next they examine the geography of each section of the United States to discover how terrain, soil, climate, rivers, and harbors might have given rise to the differing economies of the North and South. They read Bruce Catton’s A House Divided, watch Ken Burns’ documentary The Civil War, visit the National Civil War Museum in Harrisburg, PA, and tour the battlefield at Gettysburg. They read Paul Fleischman’s Bull Run and excerpts from Michael Shaara’s The Killer Angels and from E.L. Doctorow’s The March. They study the Narrative of the Life of Frederick Douglass as they compare slave labor in the South to immigrant labor in the North. In their study of the aftermath of the Civil War, students trace the increasing tension between Labor and Capital, rich and poor. Throughout the year, the 13s look at current race relations in the United States as a legacy of the Civil War and Reconstruction.They write two original research papers, one in the fall and the other in the winter, and present their conclusions to an audience of their peers and teachers.

Paralleling their study of historical topics, students read literary works that give them a deeper imaginative grasp of the times and places they are researching. For example, in the fall they may read Mark Twain’s Tom Sawyer and Huckleberry Finn, the poetry of Walt Whitman, and excerpts from Harriet Beecher Stowe’s Uncle Tom’s Cabin. They also study the political cartoons of Thomas Nast and the war photography of Matthew Brady. In the spring they read selections from the works of William Faulkner, Stephen Crane, Willa Cather, Langston Hughes, Richard Wright, Ralph Ellison, Gwendolyn Brooks and Toni Morrison. Throughout the year students write in a journal to record their observations and thoughts. 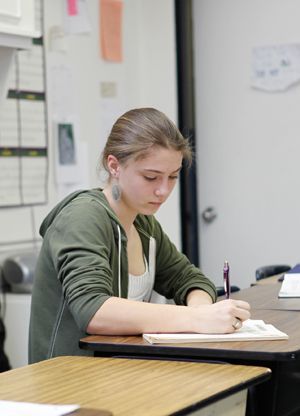 The 13s publish the School’s Newspaper, a job that requires a broad understanding of the needs of the City and Country community. The 13s strive to carry out their reporting responsibilities with integrity, fairness, and tact. At the same time the newspaper gives students practical journalism experience, it offers them a forum to reflect on the meaning of their experiences here. It provides them with a sense of purpose when they write, and a strong sense of pride in a job well done. Throughout the year, students not only improve their writing and interpersonal skills, they also become proficient at using such computer programs as Word, InDesign, Illustrator, and Photoshop to write stories and to lay out their newspaper.

During the fall in Math, the 13s intensively review fractions, decimals, percentages, ratios and proportions, exponents and variables, and problems in geometry and logic. After this review they begin their study of Algebra I. Topics covered include solving equations with one or more variables, working with positive and negative numbers, factoring, and working with polynomials and formulas.

Specials explore areas of the social studies curriculum in other disciplines. For example, in Art students create visual aids that support their research presentations. In Computer Art students create an iMovie on a topic of their choice, for example, John Brown’s raid on Harper’s Ferry. In Science, students study military technology, battlefield medicine, and the evolution of public health measures to curb disease. In Math, students examine methods for compiling and evaluating statistics. In Music, they study Civil War songs and their cultural context. In Rhythms, they work to render what they have learned in dramatic form.

The 13s receive homework every night and reading assignments during vacations. Most assignments are due the next day while others are due in two or three days. Each night the 13s can expect to do some math, and a mixture of writing, reading, vocabulary, history, and geography. This work can take them up to two hours a night, though we emphasize the quality rather than the quantity of work. We expect students to work independently and to submit work that reflects genuine effort and thoughtfulness on their part.